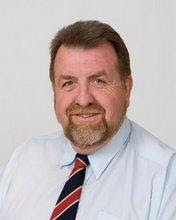 If you are out and about or want to avoid the television hype and razzmatazz of election coverage, tune to the local commercial radio station River 949.

At 6pm, River 949 will carry the Channel 9 News followed at 6.30 by full coverage of the election results from the Fairfax Radio Network.

The coverage will include national and Queensland updates as well as special coverage of the local Ipswich and Toowoomba seats of Oxley, Blair, Wright and Groom with expert commentary by Councillor Paul Tully.

This night is likely to be remembered for many years in Australian politics so tune into River 949 for your piece of history.

Ipswich City Councillor Paul Tully is Ipswich's most qualified psephologist - a person who studies and predicts the result of elections.
In 2007, Tully accurately predicted the federal election result down to the exact number of seats Labor won.

This election is likely to be the most-closely contested election since 1961 when Liberal Prime Minister Bob Menzies was returned with a 1 seat working majority after Jim Killen was re-elected as the Liberal Member for the Brisbane seat of Moreton after securing Communist Party preferences.  Menzies was reported as ringing Killen and declaring: "Killen, you're magnificent".

In 2010, there has been a myriad of polls, predictions and pundits' pontifications – some differing wildly, including today's Newspoll in The Australian showing the two parties locked on 50:50 two-party preferred vote.  But there are several key indicia which enable some reasonably confident observations and predictions to be made.

In 2007, Centrebet betting correctly showed Labor would win the election.

As at 7.00am today, Centrebet.com.au had the ALP at $1.33 and the Coalition at $3.25, an overnight lengthening of Labor's odds of winning the election

The bellwether seat of Eden-Monaro in New South Wales, on the outskirts of the ACT, traditionally elects a local member who is a member of the party which forms the Federal Government. The incumbent ALP Member Mike Kelly was quoted at 7.00am today by Centrebet at $1.22 whereas his Liberal opponent David Gazard is quoted at $3.85.  If the people of Eden-Monaro re-elect Mike Kelly, its bellwether status suggests Julia Gillard is on her way to The Lodge.

In 2007, Centrebet favourites won 144 of the nation's 150 electorates and there is no reason to think that the smart money is not following the winners again in 2010.

Malcolm Mackerras' Pendulum should never be overlooked in making predictions about the outcome of any Australian election.  His pendulum is based on the fact that swings across Australia are never uniform but higher (and lower) than expected swings tend to cancel each other out, thus making each party's overall percentage an excellent barometer of that party's final number of seats.

NOW FOR MY PREDICTION FOR 2010

This is the toughest election to predict since I correctly forecast the 1974 debacle in Queensland when Labor was reduced to a cricket team of 11 in the Queensland Parliament after the Labor leader Percy Tucker was humiliated by Premier Joh Bjelke-Petersen. Percy also lost his own Townsville-based seat.

Tomorrow, Labor will lose a significant number of seats in Queensland and New South Wales.  Labor may pick up a handful of seats in Victoria but the status quo is generally likely to prevail in Tasmania, South Australia, Western Australia, the ACT and the Northern Territory.

Things can always change over the next 24 hours but I predict that Labor will win the 2010 election and that the 150 seats in the House of Representatives will be won as follows:

After supplying the Speaker, Labor would have either a 3 seat majority on the floor of the House of Representatives in the first scenario or a 1 seat majority in the second scenario.

Assuming Labor wins by a small margin, as Menzies did in 1961, it would be tempting for the Coalition to think that the 2013 election would be a walk-in for them.

That's what the ALP thought after the 1961 election but Menzies called a general election a year early in 1963 and INCREASED his Liberal/National Party majority and the Coalition then went on to hold power for another 9 years!

In Queensland, I predict The Greens will wins their first Senate seat.

"Psephology" is the art or science of predicting the outcome of elections.  Psephologists across the world are doing this every day.  In reality, everyone is a psephologist.  In practice, it is neither an art nor a science but simply a judgment by each individual, based on polls, figures, trends, hunches, good luck and sometimes plain old political bias.

Good luck to you for tomorrow night in your own practice of psephology. 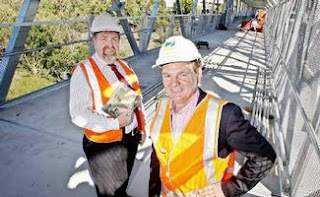 Mayor Paul Pisasale (front) and Councillor Paul Tully
on the newly named Bradfield Bridge.
FROM unsteady beginnings, the Riverlink pedestrian bridge now has a name that carries the historical weight of Ipswich's proud past.
The much publicised and long-delayed bridge from Riverlink shopping centre to Ipswich City Square will be called Bradfield Bridge.
Ipswich City Council yesterday voted to honour former Ipswich resident John Bradfield who, if he did nothing else, would be forever famous for designing the Sydney Harbour Bridge and helping design Brisbane's Story Bridge.
He also helped design and plan the University of Queensland, engineered Sydney's electric railway system and was associated with engineering works including the Cataract Dam near Sydney.
Planning and Development Committee chairman Paul Tully said the new bridge in Ipswich was the first in Bradfield's name.
"It's a proud day we can recognise his achievements and his connection with the city," Cr Tully said.
From his Sydney home, Dr Bradfield's grandson Peter Bradfield was thrilled to hear of his grandfather's honour.
"I think he'd be delighted he's been so kindly remembered. He was a proud Ipswich boy," Mr Bradfield said. "His place in Sydney was full of Queensland plants and a stained-glass window from the family home in Ipswich.
"In 2008 I went to Ipswich and Andrew Antoniolli showed me around grandfather's junior school at North Ipswich where there was a lot of artefacts about the bridge and him.
"I've been asked to come up with my wife for the opening. We were going to be away at that time but I'm sure we can make it."
Councillor Antoniolli, who went to the same primary school as Dr Bradfield, supported the bridge being named after him.
"It was a long time coming but I think it's the right one," Cr Antoniolli said. "I'm very pleased with the outcome."
Ipswich Mayor Paul Pisasale said the official opening was expected to be in the first half of October.
"It's going to be a big day for celebration. There will be a community celebration and joint retail promotion on both sides of the river," he said.
"The Bradfield Bridge will quickly become a vital part of the city's infrastructure. This is a historic moment for the city. There's no other walking bridge like this in Australia." 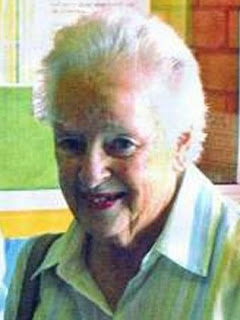 Police have advised Ms Douglas can become disoriented and forgetful without her medication.

She has white hair, blue eyes, stands at 151cm and was wearing a brown/cream blouse with horizontal stripes and a black/brown jumper.

Police have declared an emergency situation as a large grass fire burns out of control in the Willowbank area.

The Cunningham Highway is closed in both directions with traffic diversions in place.

No houses are immediately under threat but residents have been advised to be prepared to evacuate. 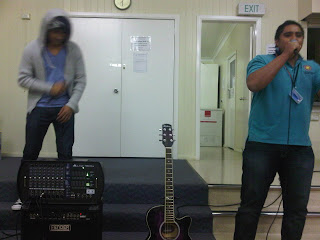 Harmony Support Links featuring the youth of Goodna rocks into action this evening at the Goodna Neighbourhood House.

Power lines are down at Rosemary Street Bellbird Park

An 11-year-old girl who disappeared after doing a grocery run for her mum has been found safe and well.

Police said the girl had decided to stay at a friend's place overnight.

She was reported missing after not being seen since noon yesterday.

Feza Ngongo had been last seen walking outside the Woolworths supermarket at St Ives Shopping Centre in Goodna, west of Brisbane, about 1.30pm on Saturday.

Detective Senior Sergeant Greg Williams said Feza had walked 7km from her Goodna home to shop for her mother.

Feza lives with her mother and an 18-year-old brother who are political refugees from the Democratic Republic of the Congo.

They migrated to Australia three years ago and moved to Goodna only three weeks ago, Det Sen Sgt Williams said.
CourierMail.com.au 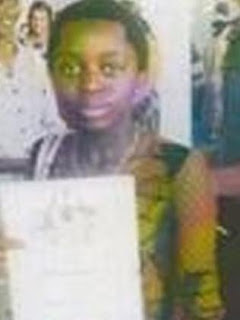 POLICE are appealing for public assistance to help find an 11-year-old Goodna girl who went missing from her home yesterday afternoon.

Feza Ngongo left her home around 12.30pm to go to the shops nearby and failed to return home.

She is described as being of African appearance, 159cm tall with a slim build, black hair, brown eyes and shoulder length plaited hair.

At the time it believed Feza was wearing black trousers and a tight white shirt under a red and white horizontal striped collared polo shirt with a zipper at the front.

Anyone who has seen the girl or has further information on her whereabouts can contact the Yamanto Child Protection Investigation Unit on 3817 1520. 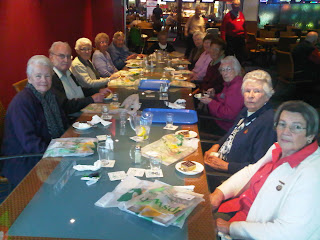 It was truly the end of an era when the Goodna Pensioners' Club held its last meeting on Thursday.

Since 1972, the Goodna Club has provided friendship and companionship for 38 years for the people of Ipswich's eastern suburbs.
The club organised regular trips to country centres, the pokies at Tweed Heads and other social get-togethers for almost four decades.

Local Councillor Paul Tully attended the final meeting at the Goodna RSL Services Club with 13 members of the Pensioners' Club.

Cr Tully presented each member a gift pack to commemorate the occasion.

He described the Club's last meeting as a "sad occasion for members" but the opportunity would always remain for members to get together on an individual basis.

Cr Tully regaled the members with the history of the Goodna area reminding members that when the Club was formed in 1972:

• Alderman Jim Finimore was the Mayor of Ipswich; and

• Ossie Knoblanche and Ted Richardson were the Aldermen for the Goodna area.

Fond memories for members of Goodna Pensioners' Club will linger for many years to come.

From 8pm Monday 2 August to 4am Tuesday 3 August 2010, the Church St off-ramp from the Ipswich Motorway (Brisbane bound) at Goodna will be temporarily closed.